Colours of the Cage

All the World’s a cage…

When Rajnath Singh’s Home ministry policy to deal with Left Wing Extremism was unveiled on 17th October, 2014 it would have been fair to expect that it would have something substantial to offer the tribals and other desperately needy inhabitants of the districts considered to be under the sway of the Naxalite movement.

The policy however has its focus elsewhere – rather than tribal needs, it is far better oriented to meeting the demands of the denizens of boardrooms sited in Mumbai, London and other lands. It is no secret that a variety of corporates see the naxalite-led tribal struggle for Jal, Jungle and Jameen to be the prime obstacle to their plans for evicting the local population and exploiting the vast mineral resources of Central and Eastern India. Rajnath’s policy seems to be primarily directed towards the quickest possible clearing of the land, so that it can be opened up to these multinationals and big industrial houses and their local agents and contractors. 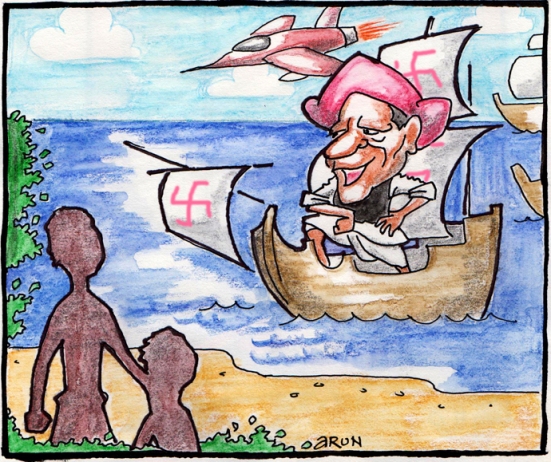 “The Biggest Grab of Tribal Lands after Columbus”

Corporations like Tata Steel, Essar Steel and others have long had their eyes on the richest lodes of iron ore in India which are situated in these regions. They have even been known to have funded the state-backed vigilante organization, Salwa Judem, to go on a rampage of arson, rape and murder and drive out 3,50,000 tribals from 640 villages as part of a vicious plan to crush all opposition and clear the path for their entry. All this was documented in January 2008 in the Report of the Committee appointed by the Central Government Ministry of Rural Development on State Agrarian Relations and Unfinished Task of Land Reforms.

It was the above government report that quite aptly called the whole drive for land acquisition for corporates in this area as “The Biggest Grab of Tribal Lands after Columbus”. The Salwa Judem was a failure and the state support for it, through recruitment of its members as Special Police Officeres (SPOs), was even struck down as unconstitutional and declared illegal by a judgment of the Supreme Court. The corporates did not accomplish their plan to take-over the land and most of the displaced villagers managed to return.

Now however, Rajnath Singh has apparently decided to complete the unfinished agenda of a Columbus-like land grab. And this time the plan is not limited to state-sponsored vigilante organizations. The General Principles of the new policy stipulate that the government “reserves the right to use any element of its national power” to deal with violence. Home ministry officials have indicated to the press that “any element obviously would mean whatever power comes under the command of the State – be it Army, Air Force or any other option…” Thus, an all-out war on its people to seize their land seems to be the government’s considered option.

Instead of programmes for the development of agriculture, health, education and overall living standards of the locals in remote areas, the policy proposes to build “development hubs” with modern communication networks, social infrastructure and roads. Obviously these cannot cater to the present tribal population in the interiors, but are meant to service the corporate projects that will come in the wake of the land grab. At best, the policy offers farcical sops as part of “public perception management” related measures – celebrating the anniversaries of adivasi icons and leaders and naming airports, buildings and roads after them. The other ‘offer’ is preferential recruitment of locals into the police forces – making them the preferred cannon fodder of an impending civil war.

The main implementation of ‘infrastructure’ development can be expected in the security sphere, which is already on in right earnest and will receive a further boost after this policy. The present paramilitary strength of almost 1,00,000 is set to be doubled with 20 new battalions being set up. The ongoing plan of fortifying 400 police stations has been expanded to include 250 more. A recent report from Gadchiroli in Maharashtra also makes clear the purpose of these plans – there, a ring of police stations at close intervals is being set up right round the iron ore rich Surjagarh hills. It is obviously a preparation for the eviction of the locals and commencement of mining operations on their land.

Tribal land rights, meanwhile, stand scheduled to be junked. The report of the Virginius Xaxa led Committee on Socio-economic Conditions of Tribals remains cold-storaged since May. Its central focus on land and recommendations for stringent norms to halt the blatantly illegal acquisition of tribal lands for private mining, large dams and other projects run diametrically opposed to the present land-grab policy push. The PMO and Ministry of Environment and Forests have, despite Tribal ministry opposition and Supreme Court decisions to the contrary, already prepared documents for taking away the rights of gram sabhas of forest dwelling communities to veto projects involving destruction of forests. 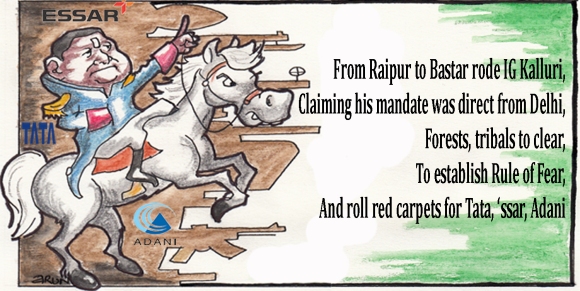 An interesting aspect of the policy approach is the proposal to post the “most competent” officers to the affected areas “for fixed terms of three years”. Since the officers in the field are the most decisive faces of the administration, the nature of their ‘competence’ is an important indicator of what the government intends to do. While the policy is silent on what qualities the Central government expects of the appointees, sufficient signals in this regard can be obtained from seeing who have been moved into key posts soon after the new regime took charge in Delhi.

The first appointment, in June 2014 itself, was that of SRP Kalluri as IG of Police of the most crucial Bastar Range of Chattisgarh. Kalluri is an officer with a notorious record, including charges of arson, rape and murder in three villages of Bastar in cases under CBI investigation. He has been named as mastermind in attacks on well-known personalities like Swami Agnivesh, Jean Dreze and Gandhian Himanshu Kumar. He has, in a press conference, even denounced the International Red Cross and Medicines Sans Frontieres as Maoist abettors. He is known to proudly project himself as the executor of the military solution that will bring the ‘development’ of the corporations to Bastar. He is perhaps the prototype of the ‘competent’ officer the government is seeking to carry out its tasks.

All in all, despite the BJP’s refusal to use Chidambaram’s catch-phrase, the present document is merely a shriller version of the ‘Clear Build and Develop’ doctrine popularized by PC after he took over as HM in end 2008. Home ministry officials have even admitted to the press that ‘it largely borrowed from minutes and circulars taken out over the last 4-5 years, while adding some new interventions.’ The then HM had projected a three year time frame for achieving his policy objectives, but the project did not even get beyond the Clear phase. Six years later there are some who, despite the benefit of hindsight, are again making similar short term projections.

All would do well to learn from the American experience. The Clear Hold and Develop doctrine is after all taken almost directly from Chapter Five of the US Army Counterinsurgency Handbook which elaborately discusses the counter insurgency approach of Clear, Hold and Build. Firstly, it would be wise to remember that even the Americans have never contemplated such a doctrine for internal issues, but have only deployed it in external operations, as in Afghanistan and Iraq. Should a government not think twice before donning the helmet of an occupying force in its own land? Secondly, it better be kept in mind that Clear-Hold-Build has been a dismal failure in both Afghanistan and Iraq, where it has been tried out. Political problems call for political solutions, not military plans.

‘Colours of the Cage’ renders itself as a platform for art, expression and opinions in the service of peoples’ struggles and resistance. The present world has increasingly become a cage for the vast majority. It is a world where the subjugated countries want independence, the oppressed nationalities want liberation and the world’s people seek revolutionary change.

Colours of the Prison (Marathi)